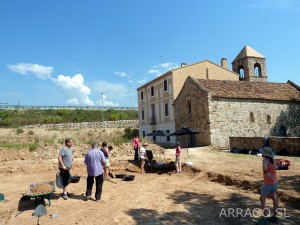 This week has begun the archaeological excavation 2015 in Sant Pau de Riu-sec.

Works will last two weeks and will focus on the area in front of the entrance to the church. This place was already partially excavated in the 2007 – 2008 campaign where part of the parish cemetery was unearthed with tombs from 12th to 19th centuries, and also the remains of a roman villa (s. 1st – 2nd centuries AD). 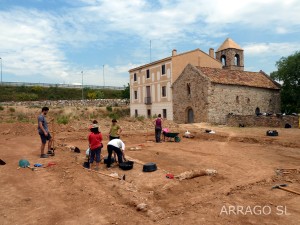 This campaign is funded by the Universitat Autònoma de Barcelona (UAB) and the government of Catalonia a part of a Research Project in which there is are also involved Sabadell city council and the Catalan Institute of Classical Archaeology (ICAC) . Master students from UAB participate in this archaeological excavation.